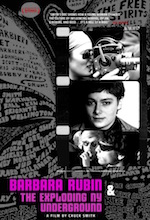 An Overlooked Filmmaker Gets Her Due

This bold, enthusiastic documentary details the unsung yet important role played by its subject in the 1960s artistic counterculture.

An evocative portrait of a vibrant and mysterious artist.

It’s a riveting tale of an extraordinary, seemingly uncontrollable force, a supremely talented woman dealing with mental illness, a central figure in an artistic movement who was gone too soon.

...pound for pound, minute for minute, there are few biographical documentaries more impressive than this.

A fascinating portrait of a "larger than life" filmmaker and collaborator.

A documentary tells the story of larger-than-life celebrity talent ‘matchmaker’ and muse Barbara Rubin, who spurned the ’60s underground movement, then died young and in seclusion

A forgotten 1960s film pioneer receives her due